Neera Tanden’s been in Senate purgatory for a week now as she and the Biden administration fight to convince Sen. Lisa Murkowski to back her bid to be White House budget chief. And Murkowski isn’t making any sudden moves.

The moderate Alaska Republican’s vote is “fluid” at the moment, said Senate Republican Whip John Thune (R-S.D.). Murkowski met with Tanden on Monday and said she has more follow-up questions, and Thune said Murkowski also has bigger concerns about her home state .

“She’s got concerns about the economy in Alaska. And there are some policies that the administration has taken already that are very harmful to Alaska. And she’s trying to have a conversation with them about things they can do to help improve the economic outlook,” Thune said on Tuesday after visiting with Murkowski this week.

Murkowski said on Tuesday that she spent much of meeting with Tanden explaining her state’s unique situation. The senator observed that Tanden is “not familiar with Alaska.”

“I’m taking more of my free time and not so free time to ensure that everybody in this administration … understands the economic situation, understands how the Alaska economy is situated right now,” Murkowski said. She said she was not asking for any special accommodations for her or her state.

But Murkowski is, at a minimum, asserting her importance in today’s 50-50 Senate. Even if she ultimately opposes Tanden, her long consideration of the nomination and dialogue with the Biden administration shows how critical Murkowski’s vote will be in the months ahead in a narrowly divided Washington. Democrats will need 60 votes to most things, and Murkowski will be top of mind as they go forward. 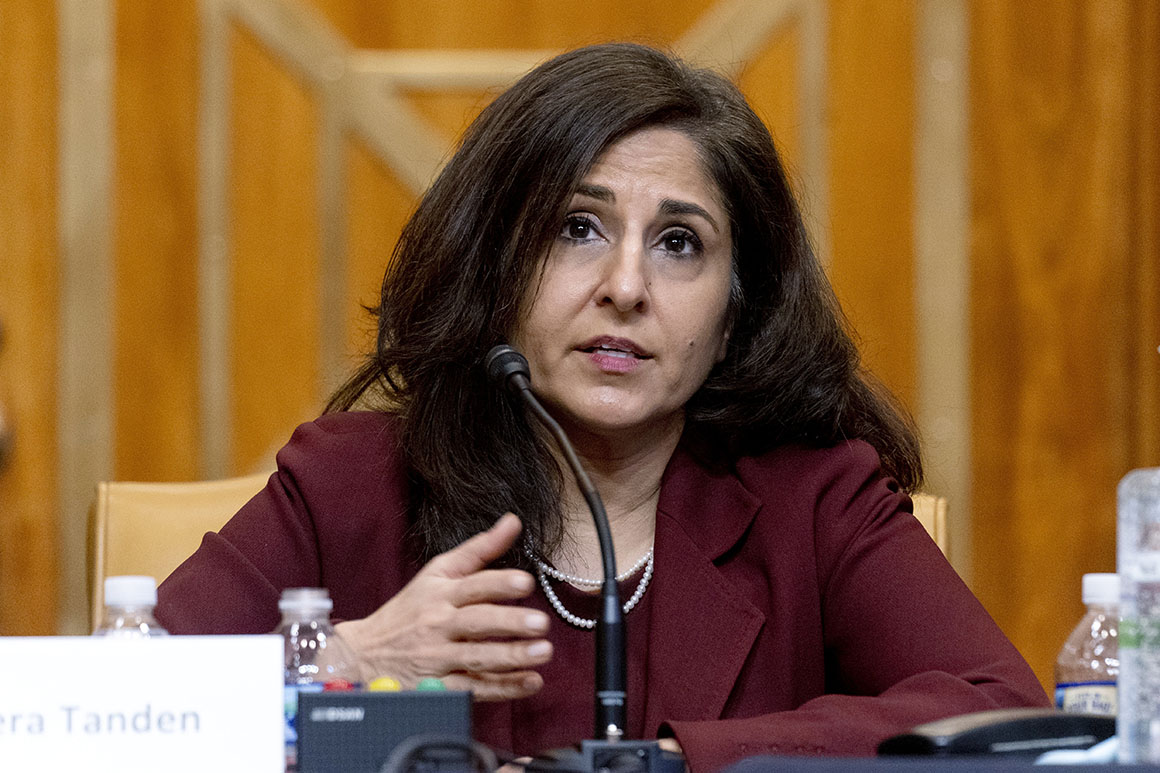 Murkowski isn’t letting on where she’s at with Tanden. She spoke for a long period with Sen. Dan Sullivan (R-Alaska) on Monday evening; both have denounced the Biden administration’s pause on new oil and gas exploration on federal lands. She’s also spoken several times this week to Sen. Chris Coons (D-Del.), a close Biden associate.

Sen. Joe Manchin (D-W.Va.) and several swing-vote Republicans have announced opposition to Tanden, in part because of her frequent Twitter attacks in the past, making Murkowski the deciding vote at the moment. The White House is standing by its nominee amid Tanden’s mounting troubles.

As Murkowski deliberates, the confirmation process for Tanden has been stalled. Committee votes on her nomination have been postponed until there’s at least a path to getting her 50 votes on the floor, with Democratic Sen. Kyrsten Sinema of Arizona and Independent Sen. Bernie Sanders of Vermont undecided.

Democratic sources said senators on the panel don’t want to vote on Tanden until it’s clear she can be confirmed. If Murkowski were to join all 49 Democratic caucus members other than Manchin, Tanden’s nomination could prevail — and the Republican would hand the Biden White House a major victory.

Senate Minority Leader Mitch McConnell has encouraged his conference to stand together against Tanden, and Murkowski is up for reelection in 2022. McConnell is supporting her reelection bid, even after she voted to convict former President Donald Trump in his impeachment trial. Joining Biden and the Democrats would amount to a snub of the GOP leader, and Republicans are privately fretting about her vote.

What Biden could give Murkowski in terms of her home state’s energy industry is unclear. Backtracking on early moves to pause drilling in the Arctic National Wildlife Refuge and temporarily halt new lease sales for oil and gas drilling on federal lands would mean breaking major campaign promises for Biden.

Murkowski noted in a January statement that while she supports moving toward “clean, sustainable energy” that “inhibiting Alaska’s resource development will only hamper our ability to recover” from the ongoing pandemic that has ravaged the state.

It’s on our plates and in our poo, but are microplastics a health risk?

‘People are sceptical’: why mining giant BHP wants to get to net zero and how it plans to do it

The chips are down: Belgium counts the cost of betting all on the potato

A starfish is born: hope for key species hit by gruesome disease

Weatherwatch: does nuclear power really keep the lights on?

Country diary: nothing beats the thrill of having whales on your doorstep